This tour takes you from San Francisco's historic Union Square to the Hotel St. Francis, down Maiden Lane, and finishes at Lotta's Fountain. Explore the city with this masterful storyteller. 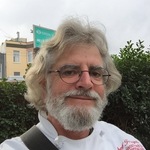 Joseph Amster is a tour guide, journalist, historian, California native, and resident of San Francisco on and off since the ‘70s. Born in Southern California, he first visited San Francisco as a seven-year-old in 1962. Falling in love with the city, he returned to study theater arts at San Francisco State University. During that time, he worked as a cook at San Francisco’s legendary Salmagundi restaurant. As a journalist, he served as editor of the Orange County Blade and IN Los Angeles magazines. With the rise of the Internet, Joseph found journalism jobs few and far between. In 2011, he and partner Rick Shelton founded Time Machine Tours. Because of their backgrounds in the performing arts, they decided to offer historical walking tours as characters from San Francisco history. Emperor Norton’s Fantastic San Francisco Time Machine launched in July, 2011 to rave reviews and has been entertaining and informing thousands since. Rick Shelton launched Drag Me Along Tours in the spring of 2013, a tour of the Barbary Coast and Chinatown in character as the Countess Lola Montez. Joseph would combine his love of history with his culinary background to begin offering San Francisco Food Safari, a shopping tour of North Beach, earlier this year. He also offers an Emperor Norton waterfront tour, made possible by a generous grant from the San Francisco History Association, as well as a Food Safari tour of the Mission District. He is currently working on a book titled Created in California: The Golden State’s Gifts to Gastronomy and can often be spotted about town in character as San Francisco’s beloved Emperor Norton. He is available for charter tours, lectures, weddings, and special events.

From the Powell St. BART Station, walk up Powell Street three blocks to Geary Boulevard. Union Square will be before you. Just walk to the tall pillar in the center of the square and hit "Start".

Refreshing beverages and tasty snacks can be obtained from the cafes at either end of the square.

Any time from early morning to before dusk.

Always be aware of traffic while crossing the streets.

Preview mode limited to first 3 locations.
Purchase to hear all 12.