Haight-Ashbury: Painted Ladies, the Hippie Movement, and the Summer of ‘67

You’ll be amazed at how many fascinating sites, stories, and personalities intersect at San Francisco’s Haight-Ashbury. We’ll begin our walk at the Golden Gate Park and end across the street from the Hippie Temptation House that was featured in a 1967 TV documentary of the same name. Along the way, San Francisco’s hippest neighborhood will come alive to you. In fact, by the end of the tour, you’ll be tempted to flash the peace sign to people passing by and put a flower in your hair.

On this tour around Haight-Ashbury, we’ll visit and chronicle the following major sites:

• Golden Gate Park, where you’ll learn about its 19th century beginnings and the contributions of gardener and landscaper extraordinaire John McLaren
• The Haight grounds, where 20,000 people watched professional baseball in the 19th century
• The stomping grounds of rock legends the Grateful Dead, Janis Joplin, Jimi Hendrix and Jefferson Airplane
• A row of some of the finest Victorian houses in San Francisco, including the famous "Four Seasons"
• The home of infamous mass murderer Charles Manson
• The townhouse where legendary ballet dancer and Soviet defector Rudolf Nureyev was busted for possession of marijuana

These are just some of the highlights that you can look forward to on our tour. Your trip to San Francisco won’t be complete until you experience the groovy Haight neighborhood.

Peace and love be with you. 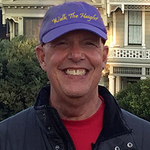 The west corner of Haight and Stanyan, at the entrance to Golden Gate Park. Normally, there is a bike rental business here, but as of this writing, the area is under construction but it is accessible.

There are many fascinating retail shops and restaurants in the area.

Any time during daylight hours.

The area is normally very busy with vehicular traffic, construction, and pedestrians. Also watch out for uneven walking surfaces.

Preview mode limited to first 3 locations.
Purchase to hear all 18.

Haight-Ashbury: Painted Ladies, the Hippie Movement, and the Summer of ‘67

Walk the Haight and tune into San Francisco's hippie counterculture
By: Barry Hirsch
(4)