Glasgow through the ages: A sightseeing walk from the Cathedral to Glasgow Green

Join me on a walk through the oldest part of Glasgow.

We’ll start at Glasgow Cathedral, where we’ll meet St Mungo, the city’s patron saint, and learn about Glasgow’s humble beginnings 1,500 years ago. We’ll bustle along Glasgow’s High Street next, where a small city had started to take shape 900 years later, in the 1400s. It was busy with the thousands of pilgrims who came to worship at the shrine of St Mungo. In the 1700s, there were Tobacco Lords on the High Street, and Glasgow had become “the cleanest and beautifulest and best built city in Britain,” according to one English visitor. (He did add, “London excepted,” but in Glasgow we like to forget about that.)

Our tour ends at Glasgow Green, where you’ll learn the very meaning of the word Glasgow.

This tour will take about 1 hour if you don’t stop at one of the cafes along the way for a quick break – or a long one. You might decide to go into the Old Ship Bank too, not for money, but for a wee nip, which is what we call a quick whisky in Glasgow.

If you like history told as interconnected stories instead of just facts, this tour was made for you. I hope you’ll find yourself drawn into Glagow’s drama just like the thousands of people before you who have come to Glasgow through the ages. 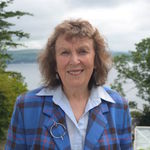 Ceud mile failte which is Gaelic for 100,000 welcomes. Welcome to Scotland and to Glasgow. My name is Margaret Hubbard and I was born in Glasgow, grew up in rural Scotland and came back to Glasgow as a student. I then became a teacher and spent many happy years in education. The long school holidays gave me time to travel all over the world, and in 1996 I went to Alaska. On a tour of Denali National Park the guide, who was excellent, spoke a great deal about bears. At one point I asked her about wolves, and she then incorporated them into the rest of the tour. At the end of the tour she drew me aside to introduce me to the ‘wolf’ expert. At that point I had no thought of leaving teaching, but I remember thinking that if I ever did, I would do so to become a tourist guide. What a gift to give visitors to one’s country the deeper knowledge they seek! Ten years later I had left education and passed the course to become a Blue Badge guide with the Scottish Tourist Guides Association. I am qualified to guide all over Scotland, and this I do with great pride and pleasure. It is an enormous privilege to tell people the story of my country and lead them to an understanding of who we are as a nation. Let me share my love of Glasgow with you. I am also a genealogist, researching family trees and connecting people with their own past. I am an avid reader and love theatre. I am a writer, and have only recently discovered the pleasure of gardening. My guilty secret is a passion for cheese scones- Scottish variety of course!

You start at the fence outside the West Door of Glasgow Cathedral. To get there you can walk from George Square, or take a taxi from there ( approx. £5) or a bus. No 38 goes from from Upper Frederick Street just off George Square. Two stops takes you to the Glasgow Royal Infirmary which is beside the Cathedral.

St. Mungo Museum of Religious Life and Art. St Nicholas Garden. Any of the old bars along the way as they are all part of the story of this part of the city.

Mid morning, early afternoon. The museums are closed on Mondays, so Tuesday to Sunday are the best times, although best to avoid Sunday morning when there is a service on in the Cathedral mid morning.

Keep an eye on the traffic and of course on your belongings.

Preview mode limited to first 3 locations. Purchase to hear all 32.

Glasgow through the ages: A sightseeing walk from the Cathedral to Glasgow Green

Ramble back in time to discover Glasgow's humble beginnings
By: Margaret Hubbard
(1)