An Amsterdam introduction: from fishing hamlet to trading centre

Join me on this introduction to the history of Amsterdam, and find out how this fisherman’s hamlet in a swamp became Europe’s most powerful trading hub in the 17th century.

How did this happen? Let’s trace the clues along the canals and dykes, and uncover the history buried beneath these cobbled streets. Our walk takes us from the bustle of Central Station, along the old port and the remains of the medieval city defenses to the maze of little streets around the oldest building in Amsterdam: the Old Church. We’ll take in the Red Light District and Chinatown along the way, and end our exploration at Nieuwmarkt and the 15th century city gate. There’s a marvel of engineering at the centre of the story too because for trade to flourish, Amsterdam had to keep the waters at bay.

The tour’s highlights include:
How land was reclaimed using the mighty sea arm that connected Amsterdam to the ocean in the late medieval period.
How the disastrous consequences of the drainage of the original peat marshes still affect us today.
Why the city’s complicated water management system led to the name Amsterdam.
Why the Dutch have a reputation for tolerance
You’ll see a medieval tower and city gate
You’ll also find out why there’s so little of medieval Amsterdam left.

There’s so much to uncover in Amsterdam if you know where to look and what streets to follow. Let me be your guide.

Please allow at least one hour for this walk – or more, if you visit places of interest along the way. 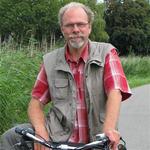 After graduation at Amsterdam University of the Arts active as producer for film, TV and theatre.
Always combined work with a great interest for history & culture. This field becoming gradually the principal activity.
Currently mainly history research for film & TV, publications, other media. Focus on daily life and practical issues : how did people do it, what did it look like.
Also presentations, educational projects and guided tours on history & heritage of the Netherlands.

Amsterdam Central Station is right in the heart of the old city. End and starting point of many public transport lines.
The walk begins on the city side of Central Station, on Station Square. When you’re in between the two turrets that mark the main entrance of the old part of the station, you’re on the right spot.

Our Lord in the Attic is a uniquely preserved 17th century house with a “clandestine“ Catholic church in the attic. A museum now.
The Old Church. Started as a chapel in the early 1200s it became the main church of Amsterdam till the 17th century. From Rembrandt to the Pilgrim Fathers, Mozart, Karl Marx, to Vincent van Gogh, Milan Kundera and Errol Garner,… they all walked on the gravestone floor paving and found inspiration here. A very special museum now.

A huge number of cafes, restaurants and pubs all along the route. And on a nice day, enjoy one of the many terraces.
If you like authentic Chinese food, perhaps good to know that the tour ends in China Town. But you’ll also find cuisines from all around the world here, in the old center of Amsterdam.

Any day, during daylight. Although an evening walk adds a special touch, but you will of course see less of the building details. Museums close generally at 5 PM.

Unusual for most visitors is the large number of cyclists in Amsterdam. And the fact that they don’t always keep to the bicycle path … So be on your guard when crossing, and keep an ear open for bicycle bells.
Although the old center of Amsterdam is pretty safe, watch out for the pest of all tourist hot spots: pickpockets. Especially on busy places with crowds. In virtually the entire center car traffic is very limited. But keep an eye on the swarming bikes!

Preview mode limited to first 3 locations.
Purchase to hear all 25.

An Amsterdam introduction: from fishing hamlet to trading centre

Explore the origins of Amsterdam, from fishing village to trading powerhouse
By: Edmond Van Putte
(3)