The Glory of Occitania

Toulouse, a gorgeous ancient city founded by the Romans, has a remarkably preserved old city centre. Never destroyed by war, many medieval and Renaissance buildings still stand as do the picturesque twisting streets. Toulouse was a major stop on the pilgrimage route to Compostelle in the early Middle Ages and became a huge centre of learning at that time too.

The tour takes you to some of the ancient university buildings, as well as to the World Unesco Heritage church of St Sernin. The Capitole square, in the heart of the old city, is a lively and lovely enormous plaza with cafés, restaurants and a spectacular City Hall called the Capitolium. It's a great place to stop and have a coffee or a drink as well!

Then we go down to the river through the medieval quarter and spend time at the river and at a Renaissance palace. Toulouse also has an enormous amount of original and beautiful 19th-century architecture. We go to the Garonne River to find out where the Romans started it all, and to see the Renaissance bridge called the Pont Neuf. And we end our tour at the most enormous, most gorgeous building ever built during the height of the most affluent period for Toulouse, the wonderful Hotel Assezat, a magnificent Renaissance Palace! 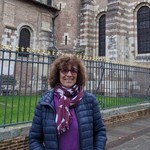 Art historian and artist, I have lived in France and in Toulouse for over 22 years. Former professor at the Fine Arts school of Toulouse, I love to show people around. It is wonderful to explore the old city and to help people discover the beautiful things there are here. And I enjoy telling secret stories and showing them hidden corners of my adopted home.

The Capitole square metro stop (line A) is easy to find from anywhere in city center. It is in the center of rue Alsace Lorraine and is reachable by getting off the metro either at Jeanne d'Arc (line b) Jean Jaurès, (lines A and B) or the Capitole (line A)
There is parking at the Capitole, or even easier at Jeanne d'arc. Buses do not go on rue Alsace Lorraine as it is mostly a pedestrian street. It is near the Place Wilson which is close to many hotels (as is the Capitole square) Nothing in the old city center is very far - it is walkable from almost anywhere.

There are some nice cafés near St Sernin church. A café- terrace on the Capitole Square is half way through the tour and a good place to rest for a few minutes if tired. A bench looking out at the Garonne River is wonderful for taking photos!! Restaurants are everywhere - I like the big brasseries on the Capitole square and the litte restaurants near the Garonne river on the rue Suau. Place Wilson has many cafés as well. And if you have several days in Toulouse do not miss the archeology museum next to St Sernin called St Raymond.

Morning at around 9h30 or 10 am or late afternoon or early evening. There is an open air market along Alsace Lorraine avenue on Tuesday mornings. Better to go later that day. Saturday is a huge shopping day, go early, or wait until Sunday when shops are closed and it is quieter and more peaceful. Many monuments are open every day except Monday but churches are open all the time.

There are some pickpockets on the Capitole square particularly when there is a major event, concert or sports event. Then it is important to use common sense and watch your pockets and bags, but in general it is safe everywhere. Just be careful in crowded areas or at night when lots of young people come out and drink. The tour doesn't go anywhere you have to worry and it is a day time tour as well. Just keep your bags closed, dont be showy about fancy camera equipment. The tour doesnt go to difficult parts of the city

thank you for telling me how you enjoyed the tour of Toulouse! please tell your friends and if you can, post your comment on Facebook for me! Many thanks and good travels

Posted by Elyse , 4 months ago

Great tour to learn about the history of Toulouse! Very clear directions and well done. Thank you Elyse!

Posted by Anonymous Explorer , 4 months ago

Fantastic tour! It was great learning about the history of St.Sernin, Pont Neuf, and Capitole, among other things. This tour is packed with information that gives you a greater appreciation for the city of Toulouse and it’s history. I hope to see more tours by Elyse published soon!

Posted by Anonymous Explorer , 10 months ago

thanks so much for your comments. So glad you enjoyed the tour and Toulouse. Tell your friends about it too!! take care, elyse

Posted by Elyse , 10 months ago

David thanks so much for taking the tour! I am so glad you discovered things you didnt know about before - makes me feel good. And congratulations on being my very first reviewer as well!!!!!!!!! I look forward to doing my next tour in Toulouse on WWII, the Occupation and the Resistance. See you then, elyse

Posted by Elyse , 10 months ago

This was such a fun tour! I used to think I knew Toulouse pretty well, but Elyse pointed out so many things I've walked by over and over again without ever noticing before and provided so much interesting history and context that it was like discovering downtown all over again! I highly recommend this tour whether you are visiting "the pink city" for the first time or even if you think (like I did) that you know it quite well. Thanks, Elyse!

Posted by David , 10 months ago

Preview mode limited to first 3 locations.
Purchase to hear all 45.

The Glory of Occitania

Discover medieval and modern Toulouse with a stroll through its cobbled streets.
By: Elyse Rivin
(8)