Humor and history, what more can you ask for in a walking tour? Discover how Tbilisi's main street, Rustaveli, was shaped by the tsars, Stalin, and the modern era. You'll find the first new-wave coffee shop in Tbilisi, the best beer garden in town, and the building that started the renaissance of revamping worn-out Soviet edifices.

This tour is a priceless introduction to Tbilisi and is great whether you're a fresh arrival or even a long-term resident, as you'll no doubt discover something new. Some of the highlights include:

I've lived in Tbilisi off-and-on for 10 years, and know its ins and outs. And as a traveler myself, I know exactly what's of interest when getting to know a city.

The tour follows the street, so there's not much turning. However, there are quite a few cafes along the way, so it might take longer than the 40 minutes I've recommended. 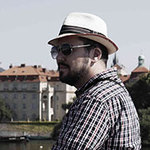 Originally from Tulsa, Oklahoma, USA, I've been on the road for over 10 years, and acting as a tour guide for the last 3 of those. Living in Prague and Tbilisi, I've traveled across Europe, the Middle East, and North Africa, and am always looking for the historical insight on any location and the weird anecdote that only locals ever seem to know. Now I'm sharing with you those stories and doing the best to connect the past with the present as we stroll down these streets together.

Exit Rustaveli metro, turn left until you see the big oval Philharmonia building where Rustaveli Avenue forks. If you're arriving by taxi, just tell them "Pilharmoniastan".

Morning/midday. There's some coffee shops along the way, and a couple of great museums to see.

There are stairs beneath the streets that are not wheelchair accessible.