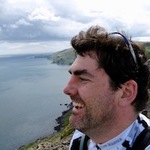 Hi, I'm Joe, the author of French License, a tragicomedy travel memoir, and The Chairfather companion photo book to my tours on VoiceMap. After graduating with a journalism degree, I jumped over to the advertising and marketing side of communications. My day job has been selling media and technology in the US and Europe for more than a dozen years, lately with startups. I write non-fiction about my adventures as an American expat abroad, first-person travel memoirs, cross-cultural observations, the impact of technological innovation on individuals, the history of food, the crossroads of ingredients recipes and culture, and recreational sailing. If you like this stuff too, let's connect on social media or my site.

If you just completed the first walk of the Chairfather tours, meet me at the Southwest corner of the Columbarium.
If you are arriving from outside the walls of the park, from the Gambetta Métro station, take exit 3, called ‘PÈRE LACHAISE.’ At the top of the escalator, take a left down AVENUE DU PÈRE LACHAISE. The main entrance is at 56 Rue des Rondeaux.
After passing the gate, continue straight. Looking up to the left, you will see the gold dome of the Columbarium, which is surrounded by walls. Go to the Southwest corner of the Columbarium, which is at the intersection of Avenue Transversal #2 and Avenue Aguado.

Père Lachaise is a gigantic walled park, with really only three practical entrances and exits. There's no food nor drink inside, so BYOB especially a water bottle. Also, only two toilets, so plan accordingly ;-)
Before or after, you may want to visit the funky Belleville bistrots in the 20th arrondissement. The three closest are at Place Martin Nadaud. A bit farther from the main entrance are two places I can recommend, Leslie Road for British fare (8 Rue du Cambodge) and Shingané for Korean BBQ (63 Avenue Gambetta). Exiting the opposite side at the little door in the Northwest corner, near the Père Lachaise métro station, there are a number of good sit-down French establishments starting at the 40s block of the Boulevard de Ménilmontant and walking North.

Any time is good, but you'll want to start before 4pm so the visit isn't rushed.

Comfortable flat-soled shoes are a necessity. High heels might break off on the cobblestone paths, and some of the terrain may be dirt or moist earth. While we have fun with our hosts, let's remain respectful by not stepping on graves, in-between is OK, and if you see a group of mourners, please pass by quietly.

To honor our hosts on Tour 2, you may choose to bring with you a bouquet of chrysanthemums, one stone, a ruler, a balloon, three paintbrushes, three pencils, three sheets of music, a mirror, a fork, a knife and a potato.

The companion photo book, also called The Chairfather, includes pictures of all of these sites. You may wish to pick it up to help identify our hosts among similar looking tombs.

Preview mode limited to first 3 locations.
Purchase to hear all 35.

Grave hop on this second tour of past luminaries in the Père Lachaise Cemetery
By: Joe Start
(10)