This tour will take you through the fairgrounds for the historic New York City World’s Fairs of 1939-40 and 1964-65. We’ll visit iconic sites of both fairs, hearing about the architecture, design and history of the famous Unisphere, The New York State Pavilion and the temporary headquarters of the United Nations, now the Queens Museum.

You’ll hear about the origins of the park, which inspired F. Scott Fitzgerald when it was an eyesore ash heap, and how that was transformed into beautiful fairgrounds and then into a major city park. You’ll hear about the colorful history of the fairs’ exhibits and pavilions, which includes the infamous feud between artist Andy Warhol and controversial mega-developer Robert Moses.

It’s best to take this tour during the day, when the Queens Museum is open, so that you can pop in at the end of the tour and see the New York City Panorama, which is an enormous scale model of all of New York City. Please check the museum’s hours beforehand, and allow enough time to take the subway and to see a few small exhibits in the museum at the end. 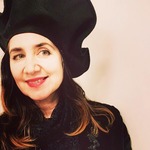 Lori Greenberg is a creative director, graphic designer and writer, who runs the Bergworks design studio. She has written about design, arts and culture, as well as the past, present and future of New York City. A die-hard New Yorker, Lori was born in the Bronx, grew up in Queens, and has lived in Brooklyn and Manhattan. She has been a resident of the East Village and Lower East Side for over 30 years. While putting together a talk about the Lower East Side a few years ago, Lori found out that her grandparents met on her corner. She can also proudly imitate the accents of four out of five boroughs.

Mets-Willets Point 7 train subway station. Exit the train and follow signs to LIRR / Flushing Meadows Corona Park. Stay on the wooden overpass and start the tour as soon as you exit the station.

Queens Museum to see the Panorama of the City of New York, and also the World's Fair collectibles exhibit. You can also go into the museum for the gift shop and cafe. This is the only stop in the area for food, bathrooms and shopping.

This is an outdoor tour, so please check the weather. Go during daylight, to best see everything. Best times to go is when the Queens Museum is open: Wednesdays through Sundays, 11am - 5pm. Please double check hours.

Wear comfortable shoes for walking. Bathrooms are available in the Queens Museum, but check the museum hours, to make sure it will be open. During the day is the best time to go, for visibility. You can go during winter, depending on how you tolerate the cold.

Travel back in time to visit the utopian future of New York's World's Fair Site
By: Lori Greenberg
(3)