Historic Krakow: A Journey through the Medieval Old Town and Wawel Castle

Delve into Krakow's medieval past, with tales of ancient kings and fire-breathing dragons, on this tour of the historic old town and castle. You’ll hear how Krakow was transformed into a royal city – and Poland’s capital until 1596 – after starting out as a humble merchant town.

Along the way, I’ll tell you about the invasion of the tribes of Genghis Khan, the Nazi general who used Wawel Castle as his home during World War Two and the rise of Pope John Paul II, Krakow's most famous son.

Some of the highlights you can look forward to include:

• The story of St. Mary's trumpeter
• Krakow's legendary fire-breathing dragon
• A walk around Wawel Castle and the Royal Palace which are open from 10am to 6pm
• Stories about St. Mary's Basilica and the Wawel Cathedral
• The Kraków Barbican, a medieval fortress
• A short visit to the Bishop's Palace, the former home of Pope John II

The tour will take around 2 hours on foot. There are plenty of cafes and refreshments along the way, should you need to stop for a break. From the finish close to Wawel Castle, it’s only a short walk back to the market square. 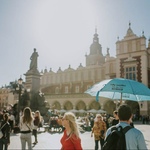 Hi, I'm Dale, one of the founders of City Walks krakow. I started my career as a tour guide in London 9 years ago. From there I headed to Berlin and worked as a guide showing visitors sites like the Berlin Wall and the cool street art murals. Next, I came to visit Krakow and was blown away by this amazing city. I spent months studying Polish history and decided to move here to work as a guide. In early 2018 my colleagues and I started City Walks Krakow, leading guests on free tours through the Old Town and Jewish Quarter, as well as Food & Vodka tours, tasting the local cuisine. I hope you enjoy this audio tour I have put together for you. If you want to find out more about the other tours City Walks Krakow offer, or for tips on great things to do in Krakow, check out our website at www.citywalkskrakow.com, or if you see us out and about with our blue umbrellas, come and say hello!

Make your way to Krakow's main market square, Rynek Głowny. Our tour will start in front of St. Mary's Basilica. The large, red church with the two distinctive towers.

Sukiennice: Cloth Hall Market, Church of Saint Francis of Assisi. For help with where to eat and other great things to do in Krakow, check out the helpful blog posts on the City Walks Krakow website- www.citywalkskrakow.com.

Between 10am- 6pm when the University and Castle grounds are open

Much of the Old Town is pedestrianised, but watch out for bikes and horse-drawn carriages. On some roads there may also be some cars.

Posted by Anonymous Explorer , about 1 month ago

Preview mode limited to first 3 locations. Purchase to hear all 52.

Historic Krakow: A Journey through the Medieval Old Town and Wawel Castle