A Lakeside Stroll from Brunswick Monument to the Botanical Garden

Is this your first time in Geneva, or are you already familiar with the city? Either way, this tour has a few stories that’ll surprise you.

Geneva was an independent city from 1154 and only became part of the Swiss Confederation in 1815. It has an incredibly rich history, with some marvellous events. I’ll tell you about them on this tour, while I guide you to some of the city’s most wonderful places. We’ll hear about an empress and a duke, international peacekeeping and the invention of science fiction. We’ll stroll in lush parks, admire the world-famous Bay of Geneva as well as the tallest fountain in the world, and watch Belle Époque paddle steamers gliding next to it.

Along the way, you'll hear about: 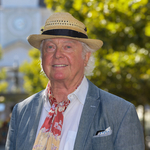 My name is Ariel Peter Haemmerlé and I’m a certified Geneva tourist guide. A very diversified professional life has made me discover many aspects of our city. My last official job was to take care of the archives of the Geneva State Heritage Office. Only when I got retired – a good number of years ago – I really started to have time to work as a tourist guide. But since, Geneva Tourism and many other agencies call for my tours all the time.

The tour starts in front of the Brunswick monument at the right bench of the lake near the first bridge. It’s of pink marble and so big, you can’t miss it.

The Cottage Café behind the Brunswick monument, the many ice cream cafés and refreshment bars at the lakeside, the restaurant of the “Bains des Pâquis”, the restaurant “Pearl of the lake”, the refreshment bar at the end of the botanical gardens. There are also public toilets near de Sissi statue and on the way.

You can take this tour any time in daylight, preferably not before 9 a.m. in summer or 10 a.m. in winter to see the fountain. At night, it’s not funny.

Geneva is a very safe place. The criminality rate is very low. However, use normal precautions against pickpockets. There are not many, but in case… And don’t hang around the rue de Berne late in the evening. The route is wheelchair accessible.

This brought back memories of Geneva. I would love to visit it again when this pandemic is over.

Posted by Patrick , 7 months ago

A Lakeside Stroll from Brunswick Monument to the Botanical Garden

Take a relaxing walk along the right bank with this guide to Geneva’s marvels
By: Ariel Pierre Haemmerlé
(2)