Something started when those first Dutch ships swung about and pushed themselves through the heaving swells to dock right here. They started a story in which the past keeps colliding with the present. Well, that’s my take on it. On this tour I’ll take you through the Company’s Garden and tell you about the extraordinary things that happened here. I’ll tell about why a garden was what those first Dutch colonisers wanted, and how the British reshaped it, to suit Victorian sensibilities. I’ll tell you about characters who left their mark on Cape Town, like Cecil John Rhodes, and about the day Apartheid ended. This tour is also my story. How can it not be? I’ve lived through big changes in a society that is strange, odd, endearing and awful. I’m a history buff working in the present tense. Like most people I’m a bunch of contradictions, and somewhere along the way I became an enemy of the state – without really meaning to! Cape Town’s just one of those places. 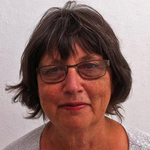 Eve still isn't sure whether she is an artist who writes or a writer who paints. But this creative tension feeds her. And keeps her trying new stuff and taking chances. It might turn out that audio is her metier – she loves its immediacy and is addicted to telling stories. Eve lives in Cape Town. She is a grandmother with two cats and a visiting hadeda.

Entrance of the Company's Gardens, corner of Wale Street and Adderley Street. Between St George's Cathedral and the Houses of Parliament.

Stop by the Company's Garden Restaurant for a drink or snack, or take a break on one of the benches and feed the squirrels and pigeons.

During daylight hours. It's quieter during the week.

Avoid the area at night.
Be aware that the squirrels might climb up your legs if you stand still for too long!

Explore the heart of old Cape Town, where the past collides with the present
By: Eve Sandler
(12)