Bucharest’s Highlights and Beyond: Monarchy, Communism and Modern Times

Let’s embark on a guided walk that takes in Bucharest’s most iconic landmarks but also delves deeper, going beyond famous attractions to get under the skin of the city. This is a journey through Romanian history that will give you an understanding of this enchanting country and its past.

Our walking tour starts in front of the monumental Romanian Athenaeum which – though it could pass for a Greek temple – is a century-and-a-half old concert hall. From there we’ll make our way down Calea Victoriei, or ‘the Victory Way’, one of Bucharest’s best-known streets. It’s famous not only for its array of luxurious shops, but also its rich history. Along the way, we’ll wander past the balcony on which Romanian dictator Nicolae Ceaușescu gave his last speech before the fall of Communism. We’ll see the Royal Palace too, and discover the heritage that the monarchy left behind in Romania.

Our guided walk ends in the Old Town, where you’ll find the medieval ruins connected to ‘Vlad the Impaler’, the prince who inspired Dracula, and other dark and enticing stories of a bygone Bucharest. 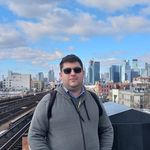 Hi! My name is Florin.
I was born and raised in Bucharest, Romania.
When I started to travel I was fascinated with Europe but especially with Romania!
I became a tour guide in Romania 6 years ago, and I started my own travel agency. Being a traveler and also a guide, I know how important it is the first impression a person has when he visits a foreign country. So I had the chance to design and offer amazing trips to those that visited Romania.

You will start in front of the Romanian Athenaeum, next to Revolution Square, the Royal Palace, and the Athene Palace Hilton Hotel.

You can stop and visit the Romanian Athenaeum, The Churches on the way, The National History Museum or Bucharest History Museum.
They are also plenty of restaurants if you need a break, Caru cu Bere and Hanul lui Manuc are just 2 of them.

Like in every big Capital it's best to keep an eye on your belongings :)

Preview mode limited to first 3 locations.
Purchase to hear all 39.

Bucharest’s Highlights and Beyond: Monarchy, Communism and Modern Times

Peel back the layers of Romanian history on this stroll through the capital
By: Florin Preda
(2)