A journey through revolutionary struggle in Cape Town. Written by journalist and activist Gael Reagan, and produced by Iain Harris, the Revolution Route is infused with performance poetry and original music. It explores stories and characters of resistance to oppression, from the Khoekhoe resistance to colonial invasion, through the apartheid struggle where figures like Mandela, Kgosana, Biko and Haron feature strongly.

The Route was written by Gael Reagan, who was a journalist for underground newspaper Grass Routes in the late 1980s, covering the revolution as it took place. In the 1990s she covered the Truth and Reconciliation Commission for SABC TV, and in the 2000s, she was the arts editor for Cape Town daily newspaper the Cape Times. She is presently working as a freelance journalist. 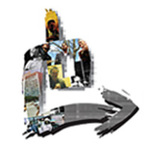 Coffeebeans Routes creates travel experiences around urban stories in Cape Town and Johannesburg. These are contemporary, urban, African experiences that provide deep insights, and plenty of fun. From tours to special events, as long as there are people and stories, we have a canvas. Iain Harris, the director of Coffeebeans Routes, is a former journalist, writing locally and internationally on African music, and a music producer.

We'll start outside Bread Milk and Honey on Spin Street, opposite Church Square. From Cape Town Station, follow Adderley Street towards the mountain. Then turn left into Spin Street, just before the Slave Lodge.

The District Six Museum; the Slave Lodge; maybe a coffee break before or after at Bread Milk and Honey, which is open from 7am to 4pm.

From 8am to 11am, and 2:30pm to 5pm. This avoids the harsh midday sun in summer. Otherwise any time is good.

Parts of this route are best avoided at night and on weekends especially if you're walking alone. Muggings have occurred in the city centre so please hide your valuables or leave them behind.

Preview mode limited to first 3 locations.
Purchase to hear all 28.

The story of the liberation struggle. Part poetry, part music. All revolution.
By: Coffeebeans Routes
(16)