Every year thousands of people visit California's world famous village of Carmel by the Sea. Meandering through art galleries, shops and restaurants on Ocean Avenue, and a visit to Carmel Beach are the usual "musts" for first time visitors. It's easy to miss the really good parts. This tour will take you behind the scenes to see a Carmel by the Sea that is as much a feeling as it is a place. Carmel is a village founded by "the creatives"....writers, painters, poets, actors, producers and photographers. They all came here over 100 years ago, because it offered unlimited peace and beauty as well as a unique freedom to reach for the stars - undimmed by street lights because they're not allowed in Carmel. You'll see and hear the stories of the outdoor Forest theater, historic hotels like the Pine Inn, Cypress Inn and La Playa hotel. You’ll visit the famous Comstock Houses, the Murphy houses, Robinson Jeffers Tor House and even Frank Lloyd Wright's "Cabin on the Rocks."

This tour will take you to breathtaking and stunning views of the ocean, from Carmel Beach, around Carmel Point to the bird haven and River Beach. You’ll see how all the houses here are creatively un-alike, with names instead of numbers, gardens in every front yard and fences that are artistic expressions in themselves. We will also talk about Clint Eastwood and how he has touched Carmel with his famous Hogs Breath Inn, and the 150 year old Mission Ranch that he saved from destruction. We will end the tour where the story of Carmel began - Father Serra's Carmel Mission. This tour is meant to inform, entertain, inspire, and perhaps even help bring out the creative art and spirit that you have inside as well. 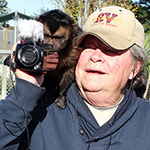 Bob Hamilton is a 57 year veteran of the radio, music, television and online industry....disc jockey, program director, industry magazine producer and writer of five books about and for the radio/music industry. He is also a pioneer in online publishing, creating New Radio Star, an online network for the radio music industry in 1982 that continues to exist today. He was host of Fast Forward for two years, a weekly show with major recording artist guests in the early years of MTV, but also seen around the world. He is an audio and video producer, a former Billboard magazine radio producer of the year. He worked with many major recording artists and record companies, producing life stories to accompany World Premieres of releases for artists like Abba, David Bowie, Heart, Kenny Loggins, George Strait, Hall and Oates, Jefferson Starship, Paul Anka and many others. He has stayed on the forefront of new technology and multi-media, creating the life story of the group Heart on CD-Rom in the 1990's. Most recently his dedication has been to video, especially documentary. Last year he created the 8 hour documentary, RVing the Bay Area (about the San Francisco bay area) and is currently finishing RVing the Monterey Peninsula and RVing the Central California Coast. At their invitation, his entire collection of work has its own place in the Rock and Roll Hall of Fame Library in Cleveland, Ohio and this app witll be the latest addition. He is currently dedicated to telling the story of the entire California Coast on video, audio and now online apps. After growing up in Oklahoma he spent many years in New York City and Los Angeles, but, moved to Carmel By the Sea in 1977, where he has most of the last 40 years. Over those years, he took many friends and family members who came to visit, on a tour of his beloved Carmel and now he is honored to get to show you this wonderful place as well. You can contact Bob by email at [email protected] or see more on his websites, MyMontereyPeninsula.com, RVingthecaliforniacoast.com and RVDream.com

We will begin in the parking lot in front of Carmel Poke Company just inside the second entrance of the Crossroads Shopping Center, just outside Carmel by the Sea city limits. If you’re coming from the north, head down highway 1, passing Carpenter, Ocean and Carmel Valley Road intersections. Then turn left at the stop lights at Rio Road, then a right at the light between the Shell station and Wells Fargo Bank. Just behind the bank you will see Carmel Poke Company...turn right into that parking lot. From the south, go up highway 1 to Rio Road, turn right and then right again at the second light. Park in the parking lot in front of Carmel Poke Company, behind the Wells Fargo bank and start the tour.

Anytime of day is great! But, you will have less traffic if you take the tour during the week. Weekends are busier in Carmel.

As you travel down Ocean Avenue, the main shopping street in Carmel, be aware of pedestrians crossing the street. They have the right of way and are often not paying attention. They are on vacation! While all of the streets on the tour are safe, some of the sides streets are fairly narrow and have lots of trees, so it might be a bit uncomfortable for large RVs.

Preview mode limited to first 3 locations.
Purchase to hear all 55.

Cruise the avenues and beach roads of Carmel, the original creative paradise
By: Bob Hamilton
(16)